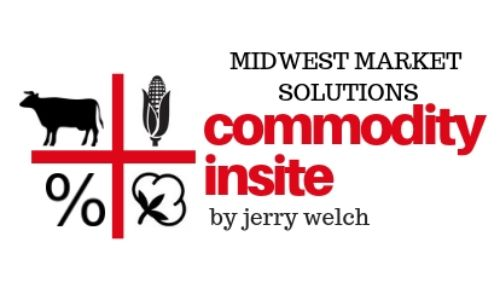 Below is my weekly newspaper column "Commodity Insite" with a chapter entitled, "Thus Far." I composed that piece on May 17. I decided to re-post it here on Inside Futures because of the historic events that unfolded in the week that just ended with stocks and bonds. It was, indeed, a history making week.

At one point last week, the Dow experienced its 4th largest point decline in history when is shed 800 points. A day later, interest rates on the 30 year Treasury bonds fell to a new, all time historic low. Commodities per se as measured by the CRB and Goldman Sachs indexes fell to multi-year lows as deflationary forces keep sending most hard assets and in particular the ag-markets to lower and lower levels.

Last week the bears ruled and the bulls drooled. And in my view, the Dow, et al, continue to get off easy. At least thus far!

The negative impact of the Trump tariffs and trade war with China has weighed heavily on American farmers since March, 2018. But only over the past few weeks have the tariffs and trade war been a concern to Wall Street and the stock market. Farmers have taken it on the chin for the past 14 months while stock investors during the same time frame exceptionally done well.

My column from March 2, 2018, entitled, Trump Tariffs I quoted the President as saying, ..."trade wars" with other countries would be "good, and easy to win." Farmers that day were receiving $10.71 a bushel for soybeans but a few days ago prices slipped to $7.81, the lowest since December 2008, when the nation was mired in the worst recession since the Great Depression of the 1930s.

In December of 2008 the Dow Jones was trading around the 8230 level but on May 1 of this week,the Dow hit a high of approximately 26,700. Thus, from the very start of the Trump tariffs and trade war with China that should have been, good and easy to win, American farmers have watched the price they receive for soybeans fall 34% while the Dow Jones has rallied that much and more.

Here are some quotes from Trump Tariffs published here in this newspaper on March 2, 2018.

My top three trading rules I tout on a regular are; 1) Nobody Knows for Sure. 2) From an old Chinese saying and I quote, Zng sh shyng yg tngzh. And 3) Know Your History. And based on history, here is what I recollect about trade wars of any kind even though the President claims they are, good, and easy to win.

Several thoughts ran through my mind when I heard of the Trump tariffs. The first was, oh, oh! Someone does not know their history!The second thought was China and the simple fact they purchase more than 50% of all soybeans exported from the U.S. It is doubtful that China will respond in kind by cancelling US soybeans. I only offer that observation because the tariffs were not specifically earmarked toward China. But you never know about such things when emotions begin to run high.

Robert Shiller, Nobel Prize winner in Economics in 2013 had these pithy remarks about the Trump tariffs in an interview on CNBC. He said, President Donald Trump's tariffs proposal will have an "immediate disruption effect" and will hurt most people, except perhaps steel workers and those who own stocks in steel companies.

Mr. Shiller went on to say, "I'd wonder if this isn't just a first step, that Trump has in mind raising other tariffs. Even if he doesn't there will be other countries who will retaliate and they'll get bigger. This is really like a first shot in a war and that's what is worrisome. That's what happened in the Great Depression.

When investing or trading in the period ahead with the Trump Tariffs about to become law keep these thoughts in mind. One, know one knows for sure what the markets will do. Secondly always practice that old Chinese saying and for those that forgot their Mandarin from high school or college it means, always use a stop. And finally, before you plunk down your hard earned cash in any market, know your history.

Here is another rub. From qz.com answering the question, Who pays for tariffs? The headline reads. EARTH TO DONALD. The US, not China, pays trade tariffs on Chinese imports. taxes are applied on goods coming in, and American importers are the ones responsible for paying them. Some absorb the cost; most pass them onto the consumer.

And a CNBC analysis of data from the Treasury Department ranks the combined revenue from all the presidents tariffs as one of the biggest tax increases since 1993. The tariff revenue ranks as the largest increase as a percent of GDP since 1993 when compared with the first year of all the revenue measures enacted since then.

The ones suffering the most from the Trump tariffs and trade war are American agriculture produces and consumers. Wall Street has gotten off easy. Thus far.

Drop me line at commodityinsite1@gmail.com if you wish to see an issue or two of my newsletter Commodity Insite. It comes out twice a day and when needed I also send out Special Email Alerts. Drop me a line or call me at 406 682 5010.

There is no substitute for timely and accurate information.

Though commodities per se are caught up in a bout of deflation, I do not expect that bearish scenario to last much longer. There are several scenarios rapidly unfolding that will reward the bulls, not the bears. Respect the fact that deflation has been the dominant market force since March , 2018 but also understand that things are about to change.

I would enjoy working with you in the period ahead as the entire Big Four: stocks, bonds, currencies and commodities rapidly change course. Let me hear from you!

This material has been prepared by a sales or trading employee or agent of Midwest Market Solutions and is, or is in the nature of, a solicitation. This material is not a research report prepared by Midwest Market Solutions Research Department. By accepting this communication, you agree that you are an experienced user of the futures markets, capable of making independent trading decisions, and agree that you are not, and will not, rely solely on this communication in making trading decisions.

The risk of loss in trading futures and/or options is substantial and each investor and/or trader must consider whether this is a suitable investment. Past performance, whether actual or indicated by simulated historical tests of strategies, is not indicative of future results. Trading advice is based on information taken from trades and statistical services and other sources that Midwest Market Solutions believes are reliable. We do not guarantee that such information is accurate or complete and it should not be relied upon as such. Trading advice reflects our good faith judgment at a specific time and is subject to change without notice.There is no guarantee that the advice we give will result in profitable trades.